Congressman Charlie Dent Visited Bitronics today to raise flag for a 100% Made in America product.

Rep. Dent to inspect production process and present a flag that had been flown over the U.S. Capitol to commemorate Bitronics® 100th year of production of Made in America products.

LEHIGH VALLEY, PA (May 14, 2010) – Rep. Charlie Dent visited Bitronics in the Lehigh Valley Industrial Park. He presented a flag that had been flown over the U.S. Capitol to commemorate Bitronics’ highly technical products, designed and manufactured in America. He also inspected the production process that relies on a skilled labor force found here in the Lehigh Valley.

Bitronics and its predecessor, the Roller-Smith company, has operated in Bethlehem for over 100 years.

Acknowledging the visit, Volker Oakey, Chairman of NovaTech Automation and Bitronics, said “We are the kind of company one might expect to find in Silicon Valley, not the Lehigh Valley. We appreciate Rep. Dent’s commitment to manufacturing, and on behalf of our employees we thank him for the flag from the Capitol.”

Bitronics owes some of its success to the programs of the MRC (Manufacturers Resources Center) and the Benjamin Franklin Partnership. Says Frank Wendt, Bitronics’ vice president of operations: “We value the contribution of the MRC in helping us integrate world-class quality standards into our manufacturing process. With those processes in place, we achieve consistently high levels of final product. ”

“Bitronics represents American competitiveness at its best,” said Jack Pfunder, Director of the MRC (Manufacturers Resource Center). “Bitronics’ success demonstrates that the programs we have initiated to help small business can make a difference. This is a “Made in USA ” product that relies on sophisticated engineering and rigid quality standards.”

Since their introduction in the 1980’s, Bitronics has produced nearly 185,000 digital instruments. Bitronics produces utility grade meters and measuring devices for the electric utility industry. Considered the “gold standard ,” these devices are remarkably reliable precision instruments, installed in close to 40% of the electric substations across America and exported throughout the world.

Q: I have 2 PTs and 3 CTs available to connect to your wattmeter.  Is that called  a 2½ element configuration? A: In the context of measuring three-phase power, it all depends on whether your PTs are connected line-line or line-neutral.... 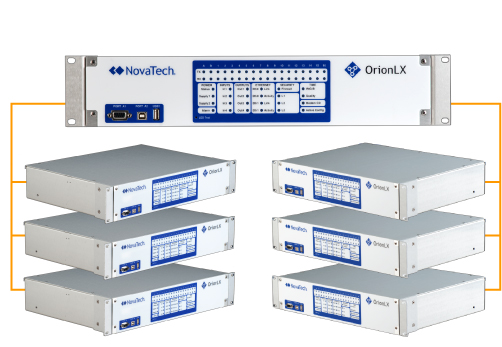 “Cascaded Orions” for the Orion Substation Automation Platform (options #97 for Master and #98 for Slave – visit the OrionLX Model Number Generator) allows creation of configurations for multiple-OrionLX systems without having to define Master and...